Page 5 of all posts

This note is intended as a handy guide or cribsheet or starting point for people unfamiliar with tipping points, margins, critical mass, paradigm shifts. (It is a little in the manner of my Right-wing Guide To Nearly Everything - RWG2NE - which I fear never did really reach a critical mass, or a…. etc, etc)
Read more...

What kind of public performance should I try to deliver? I used to do quite big presentations for industry, schools, universities and NGOs. I appeared once at the Hay Literary Festival and once at Glastonbury (until I was run out of the latter by grunge eco-freaks). These events were highly argumentative, and entertaining for at least some in the audience, which I very seldom appeased.

Now, I want to face different challenges in a quite different spirit. Read more...

“The Wife” is almost misogynist

"The Wife", enjoyable and in places subtle and supple as it is, remains open to the charge that its basic premise and plot does no favours to feminism. Read more...

In 1924, Stanley Kennedy North drew two maps, one for the Thomas Cook tourist business and the other a London transport map for the 1924 British Empire Exhibition (the one featured in The King's Speech). 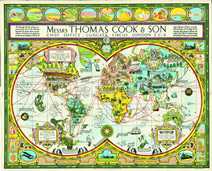 “The Favourite” is misogynist

It is possible that my title is one tad too strong, if nicely economical. At more and milder length I would say The Favourite is disobliging to women and in particular to the interesting women it purports to portray. Read more...

This is an account of my attempts to discover and understand the 20th Century Jewish philosopher of empathy,  Edith Stein (Saint Teresa Benedicta of the Cross). It includes (listed below) what I hope are fruitful leads. I came across her as part of my work on the Carmelite order, in which she became a professed nun until the Nazis found and killed her. I have at last read the philosopher Alasdair MacIntyre's short intellectual biography of Stein. It's invaluable, not least because his journey to and within Catholicism parallels hers but especially because he understands that her pgilosophical writings are alien in all sorts of way to an untutored English reader. I have also at last read her doctoral thesis, The Problem of Empathy, and much of her extraordinary memoir, Life In a Jewish Family. I don't yet know her theological writing and am looking forward to it. I hope you will remember that I am a failed Cambridge University philosophy undergraduate of the very early 1970s. I couldn't get my brain round analytic philosophy but came away as rather a snob about Continental Philosophy. My love of Wittgenstein, but not my understanding of him, deepened by the Cam. Edith could have handled the former and was a minor star of the latter. My love of Wittgenstein, but not my foggy understanding of him, deepened by the Cam. Read more...

A recent, wet, windy winter day in the city of Valencia confirmed and more the wonderful experience we had one September day a few years back. Here are my Top Five attractions, in the order I would prioritise for a fleeting visitor who wanted the very special nature of the city. Read more...

“Darkest Hour” is quite bad

The latest Darkest Hour movie is enjoyable and has high production values. It is, as lots of people say, rather a good flipside to the blockbuster Dunkirk. But whilst Dunkirk had merely a few absurdities amongst its conceits, Darkest Hour is, I declare, positively unethical in important parts of its story-telling. Read more...

I have made one rather feeble and unsuccessful attempt to "sell" these ideas for TV shows. I would like to present, write, mentor or research any of them. But I don't really mind. It would be nice to see them on-air, whoever and however it happens. Read more...

This piece argues that we do not have much empathy, and that even if we had more it would still be a very imperfect engine of moral or ethical behaviour. Read more...